So now that school’s started and most of the little beasties are clear of Walmart or Staples or wherever and I’m not in danger of tripping over little limbs (or strangling some squawking brat), I can safely indulge in my fall ritual—stocking up on school supplies!

No, I’m not a student, but I have a longstanding love of paper, pens, folders, etc. I’d always felt a giddy sense of anticipation while shopping for this stuff every fall, and the giddiness has followed me into adulthood. To this day, as I stand in the aisle weighing the benefits of liquid vs. stick glue, I can summon the bygone feelings of school dances, sleepovers and float-building committees; of begging my dad for use of the car to attend the first home football game (read: actually skipping the game and instead cruising all 1.5 miles of our main street over and over at 25mph); of tasting the first crisp wisp of fall on my tongue and carefully selecting that perfect first-day-of-school outfit. Even after entering high school and becoming the punk I am today, school-supply shopping was still a guilty pleasure.

We didn’t have iPods back then; we walked around campus with our trusty Walkmans hooked to our belts. Not a single student had a cell phone—or a computer, for that matter. And nearly everyone, boys and girls, took Typing 101, which featured (gasp!) actual typewriters. And yes, I painted my nails with the Whiteout. Often.

(It was only the hardcore geeks who took the one and only computer course available. The monitors were about 9 inches; green type on black backgrounds. I got a Brother WP1 Word Processor my sophomore year; the “screen” allowed you to see three whole lines of type and you saved your work on expensive little disks that held 240KB. I was the total shit!)

My annual trek got me thinking about some of my fave must-have school supplies that are no longer de rigueur among the Bieber-Twilight set (or hell, not even available anymore). So please indulge me while I take a visual stroll down memory lane to revisit some of my favorite fall buys.

No. 2 Pencils
The be-all-end-all of school supplies. I never did learn the importance of No. 2 versus, say…No. 1 or 3 pencils. I just knew I had to have them. And woe be the student who bought the wrong kind. Ridicule!

Trapper Keeper
Ah, Mead. You knew what students wanted. My Trapper Keeper had some swirly, sparkly cosmos scene, and I usually managed to keep everything within tightly organized. For about 3 weeks.

Texas Instruments Calculator
I had some deluxe jobby with triple the number of buttons as other calculators. Because obviously, the more buttons, the more you learn. I still have my calculator, actually (damn, those things were built to last!), and just like back in school, I still only use the plus, minus, divide and percent buttons. 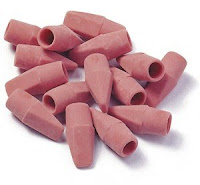 Pencil Erasers
Yeah, I usually had a lovely Papermate Pink Pearl as well, but I preferred the standard erasers that fit on the ends of pencils. For ease of chewing during tests, of course.

Friendship Pins
Remember these? If you were a chick growing up in the ’80s, you likely wore them all over your shoes, in your hair, fashioned into necklaces and bracelets, etc. During sixth through eighth grades, I would make a shit-ton over the summer and give them to my BFFs on the first day of school. 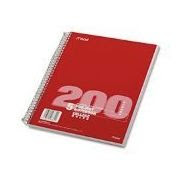 Ruled Notebooks
Well duh. One (or several) for every subject. I had one teacher who would go ballistic if his classroom floor was littered with the little bits of paper that flew like confetti when you tore sheets out of the book. (It was about that time I switched to the uber-sophisticated Composition notebooks. Nothing says “sophistication” like faux marbling. Nothing.) 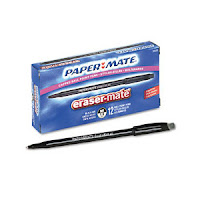 Erasermate Pens
It’s ink! That you can erase!!! The technology, it boggled.

Scratch and Sniff Stickers
SUPER popular when I was a young’un. They usually smelled like shit, lost their scent in about an hour and were a bitch to remove from all the ill-advised places you stuck them throughout the year (my elementary-school principal dedicated an hour on the last day of classes specifically for the task of removing stickers from our desks. Maybe that qualifies as janitorial experience if this whole book-editing thing doesn’t pan out).

Push-Up Pencils
Of course I had my beloved no. 2s, but push-up pencils were way too much fun. In cases of extreme boredom, I’d remove the top piece of lead-tipped plastic, push it back through the end of the pencil to reveal the next tip, then repeat. Over and over and over. It was always such a tragedy if the end cap broke and you lost all your lead. 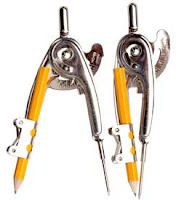 Metal Compass
I think I still have scars from these things. And I’m sure they’d be confiscated as weapons at most schools these days. 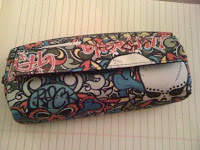 Pencil Holders
I still use them. This is my current one. :)
Posted by ECPI Editors

Back-to-school shopping is not nearly as fun anymore. I bought all my textbooks from Amazon (2 Kindle versions and 2 dead tree) and no pencils, notebooks, or calculators. My MacBook Pro has replaced them all.

However, plaid skirts and Mary Janes are still acceptable attire.

Classic! I remember all those gems. I still have an old sticker book of scratch-n-sniffs and Garbage Pail Kids too.

Ann, you've obviously mistaken me for someone who weighs wants vs. needs. Of course I no longer neeeed any of these things. This isn't about need. No ma'am.

Joey! Thanks for stopping by, man. I'll send some friendship pins as a thank you. I still have Garbage Pail stickers, though I'd kill for your Pez dispenser collection.

I loved my trapper! And my pencil bag with the Velcro closure. Geeky me still buys some of that stuff, too to "keep myself organized."

I still have trapper keepers filled with stories I wrote in high school. LOL I love Traper Keepers so! And notebooks with various pictures on them. There are some awesome Alice in Wonderland ones I have my heart set on as soon as the price drops some more! And accordion folders! Yes, I stalk the back to school clearance too. ;)

Those "erasable" pens... I recall that they left giant holes in my paper. hehe

My Trapper Keeper was the bomb! Who cared if its chintzy plastic rings broke after just a week, less time than it took me to convince my mom I just haaaad to have one? It was a Trapper Keeper, damn it! That was like the 1987 Louboutin of school supplies. Mine was magenta and purple and teal and featured a tropical sunset motif. Which was very much the same vibe as my Pogo Ball, now I think of it…

I buy this stuff all year long. I have little reason to wait for fall and the back to school rush.

Pencils are the best. I have tons and tons of them. Still prefer to use pencil over ink. Something very mercurial about No.2 lead.

I have quite the pencil fetish myself, Mari. And while I'll cop to chewing those pink erasers, I NEVER chewed the pencils themselves. And yes, I still prefer to write in pencil over pen (though I've got a lovely pen collection too).

Oh, the trapper keeper!!! I loved all the nifty compartments and that little handy zipper pouch to store stuff. I'm old enough to remember the days before back packs were cool. We carried ... wait for it ... the book satchel!

You forgot to mention the stigma of bringing the 12 or 24 box of crayons versus the mega 64 box with the built in sharpener.

I had a NIFTY binder. The holes were at the top of the paper sheet and the paper was perforated so you could tear it out with a neat edge.

I LOVED my Nifty binder. As far as I know, they are long out of production--along with the paper. But in 1959, they were the real deal.

And pens??? I must have hundreds. Just like a magnet, I end up in the pen aisle.