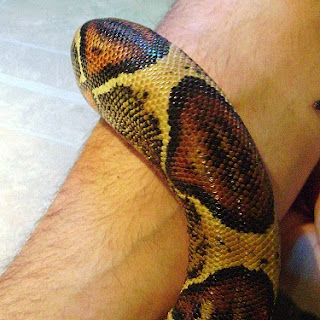 If you've ever been to the EC offices, you're aware of the fact that until very recently, we shared our space with Manaconda, a massive twenty-two-foot reticulated python. She finally outgrew her enormous, custom-built cage here and was ultimately rehomed to someone who had more room than we did.

I have to admit that I was a little afraid of Manaconda. Not because I have any particular aversion to snakes, but because we're talking about a twenty-two-foot-long snake who was as big around as my thigh. And I don't have particularly small thighs. Sure, it's unlikely that anything bad would happen, but you know how it is--the snake gets out just once, and you spend the next four years worried that it's going to happen again, and this time she's going to get you. I mean, you guys have seen Anaconda, right?

So when I heard that we were adopting a new snake, I was a little nervous. That picture up there is Ellora. She's a four-foot-long red tail boa, and is expected to grow to between twelve and fourteen feet and weigh about sixty pounds. She lives in a cage we refer to as Ellora's Cage and generously allows our building manager/IT guy to share her office with her. 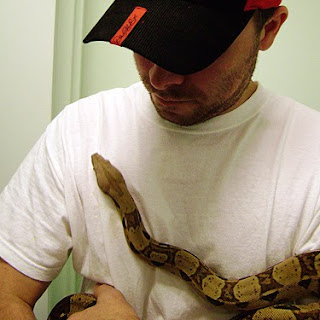 Ellora loves Randy, actually. Randy's quite fond of her as well, and as we were discussing her this morning, he mentioned that she is--and I quote--"the friendliest snake that has the power to kill you." 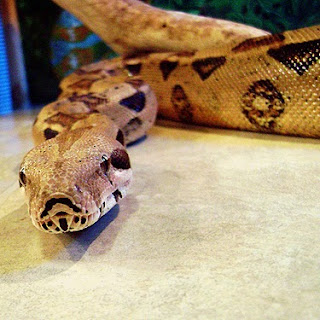 And that last picture shows her excellent villain mustache and goatee combination. Perfect for "the friendliest snake that has the power to kill you."

This blog reminded me of my mother calling me after work last week. It had been a rough day. About 10 that morning the life science teacher sent an email to the rest of the teachers informing them one of the snakes got loose and couldn't be found. She said she walked around in fear all day. I couldn't stop laughing.

I can't begin to tell you how scared I am of snakes. Thank goodness we don't have many in the UK. I've never seen one here but I have in the States - a few times. It's sudden movements that scare me so the big snakes are less of an issue but I saw a film where the snake leapt across a room and that was it - phobia born.

Death by friendship? That sounds like the ultimate group hug. You're not the only one who has to share office space with a cold-blooded, bone-crushing, slithering thing. At least your office snake eats the other rats. That's a bonus!