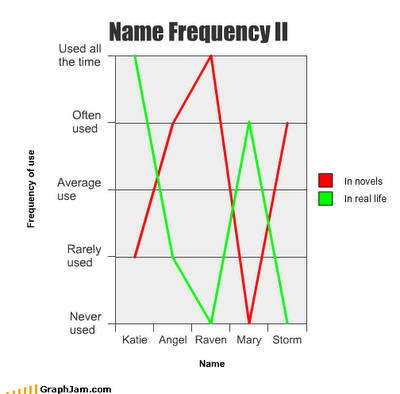 For those of us of a certain age, Angel is fairly common. Angela was the in the top 30 baby girl names of the 1960s. There were three of us in my high school graduating class, one of whom actually went by Angel. (we only had 1 Mary)

I think it's a generational thing. Mary's not common anymore. They're all Emilys and Olivias now.

Of course, of my acquaintence, Baby Storm's mom is Angel... 8)

I love these charts. Sometimes they get it just right. There are never Katies in romance novels. They're all Katherines or Cats.

My sister was born six decades ago, and she bemoaned her name, Emma, which of course no one had back then. Now, of course, there must be at least one in every primary school class!

I have an 'Angelica,' named after Angelika Huston although the character is nothing like her. I just think Angelika Huston is so elegant and beautiful and funny as all-get-out. Anyone remember her in The Addams Family? "Don't torture yourself, Darling. That's my job."

In my generation (we won't mention which one) Mary was so common that most classes had six or seven girls with that named. They were Mary Elizabeth, Mary Sue, Mary Ann, Mary Margaret, Mary Beth, Mary....

Now no one names they daughters Mary.

This is interesting! I'd like to see more names and how they compare. Are these just the ones with the highest discrepancy?

Ahem. I have a 3 year old named MaryClare. I do live in the South though. We likes our double names.

Naming trends can be regional. Storm and Raven, for example, would be considered normal here in Alaska. Remember during the presidential election when people were remarking on the names of our governor's children? We were like "Uh, so?" Track, Bristol, Piper, and so on are all average up here. Hunter, Denali, Maverick (name of a popular fishing boat,) these are average names in Alaska, names which might be thought of as Romance novelish, but in fact come from nature, favorite kinds of airplanes, and such.

Lesson Learned- If you set your story in a real place, you might also want to check on local naming trends.

I have a student named Raven. Great kid. Her last name is Black.

One of my heroines is named Katie. I think it's a great name. Maybe I need a Mary...hmmm...

My son's girlfriend's name is Raven. It's different, I like it.