Back in the late nineties, I’d done all the usual things. Poured over Writer’s Market, double-checked publisher requirements and sent painstakingly prepared queries to all the traditional publishers. My offering was Guardian of the Continuum, a book I categorized as a “fantasy romance”. Longer than the typical genre story, it had a strong central romance around which the paranormal elements revolved.

I was informed that “cross-genre” work didn’t interest traditional publishers, because it wouldn’t sell. Readers didn’t want a strong fantasy plotline mixed with a lot of romance. Yes, for those of you wondering, I was offering what is called paranormal romance today. You know…that genre that currently dominates the romance shelves because readers can’t get enough of it? (lol)

About that time, I learned about some new publishers willing to contract work that didn’t fit the marketing mold. The only catch was they only published online. Among my peers, the reaction to that was consistently negative. E-publishing was little different from offering it for free, an act of desperation. These publishers had no credibility in the book world, and who wanted to read a book on a computer screen, anyway? 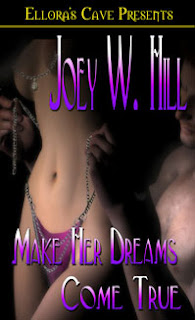 Before I wrote Make Her Dreams Come True, I liked writing my sex pretty spicy, but it still would have passed muster on the mainstream shelves. However, as I began to tell Meg’s story, I took a left turn. It was supposed to be about her meeting a sexy stranger (supposedly by chance) in a mall. In the course of a day, Daniel helps her embrace life and love again through a variety of sexy and romantic interactions. Instead, Daniel evolved into a Dom who gained enough of her trust to take the reins. He used her submission to help her embrace her sexuality and discover a self-confidence she’s never known. All within the setting of the mall—Daniel was a pretty miraculous guy!

Okay, here’s where I admit I was an idiot. Before I found out there was epublisher interest in the book, I tried the traditional publishing route. Yes, I’m a little slow. AGAIN, I was reminded that readers don’t want cross-genre work. Literary erotica OR romance was what publishers sold, not “erotic romance”. Well, I’d read literary erotica. Depressing and dysfunctional, most of the time it made me think of sex as a psychological disorder. The last literary erotica piece I ever read had the couple having sex on the floor next to the “hero’s” dead fiancée. Did I mention he dressed the corpse in her intended wedding dress? Ick. To the max. (Sorry, Valley Girl/Nicholas Cage flashback there.)

Fortunately, I did stumble on two stories at that time that gave me hope. Roarke’s Prisoner by Angela Knight, and Exit to Eden by Anne Rice. Great stories that offered emotion, romance and hot sex, they made me think: “yea, that’s how it’s done!”

A few years back, I remember getting an email from a reader that said, “When are you going to be published by a real publisher, instead of Ellora’s Cave?” In that reader’s mind, the only “real” publishers came out of New York. I don’t get asked that question anymore. Ebooks might have been the path less traveled, but I’m so glad I took that fork in the road. And today I have a lot of company –some of the most awesome authors in the romance field, as well as a fan base of adventurous, diverse readers.

A romance writer can’t ask for a better happy ending than that.


Note: In honor of being one of the “Original Bad Girls of Romance”, I will be offering some great giveaways into September. All the needed info will be posted at the following outlets!
Website: www.storywitch.com (look for Original Bad Girls header on home page)
Like me on Facebook: JoeyWHillAuthor
Follow me on Twitter: @JoeyWHill
Fan Forum: www.jwhconnection.com (Original Bad Girls thread under Running Contests)

You're amazing, Joey! What so many of us aspire to become!

You ladies are too kind - I'm hugely flattered! :> I'm glad we've all been on this journey together. I learned so much from my fellow authors along the way (and continue to do so). I've also found there's a wonderful solidarity in this genre that I think has helped carry us forward.

I'm so glad you stuck with it. Your writing is terrific.

Wow! It's pioneers like you, willing to take a chance and try something new, that have opened the doors for so many fantastic authors that have come after you. Way to reach out and grab your dreams. Like they say, no one is just going to hand it to you.

Way to go the distance, Joey!

"Natural Law" from EC was the first book of yours that I read, then "The Vampire Queen's Servant" as a trade PB when it was released (everytime I see it, I drool over "TVQS" cover). The fact that your female Dominants and male submissives are NOT the typical characters found in most of that sub-genre is what attracted me to your writing and kept me there. You rock, Joey!

Becki, thank you! Me, too. There have been days that the Walmart greeter position looked REALLY appealing, but I've resisted...so far (lol). The support and enthusiasm of so many readers and authors, obvious just from the comments that have popped up here this morning, underscore why I've stuck with it. You all keep me going (smile).

Desiree, you are a treasure. I've met very few people who embrace life the way you do, and so you are a personal as well as a professional inspiration to me. And I share the EC love! :> I'm so glad they decided to prove just how vast reader demand for ER is. It's limitless! (laughter)

Katsmeow, I'm so relieved to hear I wasn't alone in my reaction to what passed as "erotica" back then. The dead fiancee thing just capped it. (Imagine me with the creased brow, curled lip, going "Really? Who finds this arousing, and should they be on an FBI watch list?" lol) Thank you for those comments and your support. We couldn't write this without readers like yourself!

Thanks for making my morning, everyone! Look forward to any further comments you have (and they don't have to be limited to wonderful comments about me - grin)

Thank you for sticking with what you wanted to write and finding publishers who recognized your talent. I can't imagine not having your books to read, Joey. A few years ago, I was thrilled to discover the wonderful books EC offers. I eventually bought an e-reader because I didn't want to wait for the books to come out in print. Now, all of the fiction I read are e-books.

Rhea, thank you! The digital book revolution has been another great change. I distinctly remember so many believing that the majority of people would NEVER want to read books with an e-reader, and now digital versions are starting to eclipse trade sales! Plus digital sales overall are gaining momentum so quickly, as much as 100-200% per quarter. Good for trees, good for readers. Win-win. And I love the backlight on my Ipad and Nook. I just wish I could turn it off while on the beach!